One of the greatest pleasures of being a film critic is stumbling upon a work of pure cinematic art that will  rock your world and stay with you forever. I just had that experience with the Danish Oscar Nominated film “Land of Mine” which I feel is one of the best films I’ve ever seen IN MY LIFE. And it was totally unexpected, so it had tremendous shock value. Including suspense that didn’t let up, once it started. And I LOVE suspense. It’s so hard to create a real thriller diller, and I can’t tell you how sick and tired I am of World War II movies. But “Land of Mine” blew all those preconceptions about war movies totally out of my head. I couldn’t stop watching it. I was on the edge of my seat, to the point where I felt like was STANDING, perched mid-air agog at all the atrocities of war crimes that were being perpetrated on this group of young German POWs, aged 15-18.

The premise is staggering, and it’s also true. That the Germans planted something like two million land mines on the beaches of Denmark, where they thought the alllied forces were going to land first. They never did, thank god! Or they would’ve been blown to smithereens, as many of these hapless young boys, and others, are during the course of this brutal, but brilliant film.

The Danish director/writer Martin  Zandvliet is new to me, but his talent is up there with the greats. And so is his great co-collaborator Camilla Hjelm Knudsen, DFF, who is his wife and cinematographer. “Land of Mine is filmed on a beautiful, pristine beach, where there is no civilization in evidence to spoil the view, except the roiling blue of the Atlantic Ocean.

Danish actor Roland Moller is superbly frightening as one of the most sadistic villains the screen has ever seen.He is constantly yelling at his captives in both guttural Danish and German. Telling the boy soldiers that this fate is just what they deserve, being Germans. He never lets up and he never feeds them.

Zandvliet is smart enough, as a screenwriter, however, to give him multiple dimensions. His Captain Rasmussen is simply a solider doing this dreadful duty as part of his job. And while he loves being a soldier.  we come to see he hates the horrifying assignment he is tasked with.

He has to make these teenage German P.O.W.s (This is right after WWII. ends), clear the nearly two million land-mines that are on that beautiful, wind-blown beach. And the boys, of course, do not know how to do this at all. They have no training whatsoever, and are completely lost in every imaginable way possible. Some of them are crying for their mothers

And yes, many of them are blown to bits. The lucky ones die. And Rusmussen keeps cruelly telling them, that whenan they clear the beaches of these deadly land mines, they will be sent home. They are more apt to be sent to heaven.

But Zandvliet plays his cards very close to his vest, and never lets us, the audience, know WHEN it’s coming, though we know WHAT’s coming. And he surprises us at every turn.And of course, it’s more horrifying than you could possibly imagine.

The boys start off as faceless, pale, ghostly figures, seemingly dead already, but as they film goes on several of them begins to emerge as three-dimensional characters as Rasmussen does. There are two twin brothers who are heartbreakingly protective and dependent on each other.They are both astonishingly first time actors, Emil and Oskar Belton.

A very complex wise-guy who looks almost Jewish is played grippingly by Joel Basman. There is one compelling scene where he is constantly being slapped in the face. And astonishingly he starts off laughing, and he keeps being hit and hit and hit again, until well, he is crying. Reduced to tears by the brutality of this violent assault. And dirty and foul-mouthed and repulsive as his behavior is, Basman just kills you, If this was an American film, he’d be nominated as Best Supporting Actor. 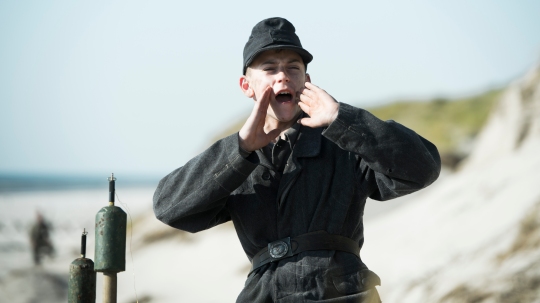 One of the two doomed twins.Stillfoto fra filmen Under Sandet/Land of Mines. Foto: Henrik Petit

It’s wonderful that this horrifically violent but beautiful film has managed with very little fan-fanfare to land an Oscar nomination for Best Foreign Film in a very crowded, competitive year, it is hardly being talked up at all. It’s up to audiences to discover it and I’m sure they will. They never will be able to forget it. “Land of Mine” is one of the greats.

Paul Walker Dead at 40 & Terrible Train Wreck in the Bronx

This is a morning full of death. I see on the Internet that the handsome actor Paul Walker is dead in Hollywood in a fiery crash, not unlike the one that killed James Dean. Walker was a very young-looking 40. And surprisingly had a teen-aged daughter.

And then I turn on the TV and get all the broadcast channels going on endlessly about a Metro North commuter  train derailment in the Spuyten Duvill section of the Bronx, the borough that I grew up in. Four people died and many more injured. I often have taken that train. Life is so fragile.

Death seems everywhere now that the holiday of Thanksgiving is over. New York is particularly a city that goes haywire on a long holiday weekend. Nothing gets done.

Like for instance Fedex was supposed to deliver a package to me, but it has not yet gotten there. And although they are open in some location sites 24 hours 7 days a week, nothing can get done till tomorrow Monday. No drop offs on Sundays, holidays especially. I found this out the hard way.

Show business and entertainment news, which I purport to cover, is a twenty-four/seven situation. It just never stops. Ask Jeffrey Wells at http://www.hollywood-elsewhere.com He’s complaining that “Don’t I get a day off!?!” Because Paul Walker’s death happened right in the middle of his holiday weekend. You can check out Jeff’s blog, if you want more info on Paul Walker’s horrifying demise.

I never got to interview him in my LONG(three decades) career of interviewing celebrities. So I don’t have a personal memory or anecdote to share. Except that my perception of him was some one attractive and blond enough to work a lot in Hollywood. He was once on the cover of one of Vanity Fair’s Young Hollywood issues, back in the early ’00’s.

I knew he’d work at lot in action films, and he did.

Like for instance the “Fast and Furious” franchise which brought him major stardom, as it were. I never have seen any of the seven immensely successful movies. I don’t even drive, so films about cars usually don’t interest me.

I always see them as weapons of death. And the violent, sudden end of Paul Walker’s life bears that thought out.

I did for some reason unknown to myself now, and lost in memory, I DID see a very good mystery thriller with him in the lead in or around 2001 called “Joy Ride.” And I remember him vividly from that. I thought he was someone who was pretty, but probably couldn’t act, but in “Joy Ride” he showed me that there was much more to him than that. As he and Steve Zahn were a couple of college kids driving(again the car theme) and picking up a psycho killer named Rusty Nail by accident on the CB radio.

Walker pretended to be a sexy female stripper/prostitute named “Candy Cane” and Rusty Nail began stalking their car. Walker had to switch in and out of this hilarious female role vocally. And got in a great deal of trouble for doing so in “Joy Ride” which was anything but. This little known, little-remembered film was also as I looked it up co-written by a young J.J.Abrams! And directed with great suspense by the great John Dahl. It was probably because of Dahl’s directing it that I went. And I was really surprised and glad that I did.

It was truly harrowing, and Paul Walker was just terrific in it. He showed he had potential to grow beyond the teen stuff he was being given at that time. And he did. I always liked him better than his better known contemporary Matthew McConaghey, who I never cared for much, until I saw this year’s stupendous “Dallas Buyer’s Club” which I will be writing more fully about soon.