When Cher, yes, CHER, enters in the Final Act of “Mamma Mia 2,” she saves the film, and yes, kicks it upstairs into Gay Heaven, or at any rate, Camp Heaven with a good, swift  stilletto-heeled sureness, only a stage and screen legend like Cher could provide. Pow! All the dullness and wishy-washiness of her young co-stars vanished, and NOW we were in the midst of a glorious fun-filled summer musical romp. She was so good, I immediately re-wrote my mind’s middling review and began raving like a teenaged fan-girl. Which let’s face it, is a cheery place to be in these troubled times. I guess I ended up loving it, and wanting to see it again. No, really.

In spite of all good sense, I found myself totally abandoning myself to its epic silliness. And why not? I always loved ABBA as a guilty pleasure. Those original, now classic, tunes got me through some very dark times when I was a house-cleaner in London in the ’80s. I was trying to get my plays done and become a right, proper British actor in the grand tradition. And it was tough. But ABBA was so uplifting, it made me forget all the charring.

I was a “Super Trooper”, and now Cher is a Super Trooper, too. In fact, she climaxes this barely organized mish-mash with that song, as well as her much heralded “Fernando” duet. As she and Andy Garcia(yes, ANDY GARCIA!) tango and sing their hearts out, both Senior Citizens now, as fire-works explode behind them, like it was 1968. Or ’86. Or one of those years, or decades that Cher’s career spans and she’s still singing! She’s a goddess for the ages. And FINALLY makes up for Meryl Streep not being in this movie except as a ghost.

You see, “Mamma Mia 2: Here We Go Again” does not really have a center to it, until Cher appears at the end like the Deus Ex Machina that she is. “Here We Go Again” flips back and forth in time between two stories, both starring lovely young blondes, Amanda Seyfried and Downtown Abbey’s Lily James. They both have to carry half the film each. 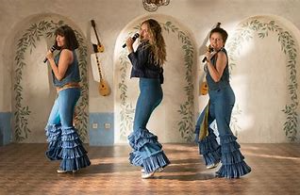 It seems Meryl’s character has died a year before “Mamma Mia 2” starts and her cinematic daughter Sophie (Seyfried) has to carry on without her, trying to re-build her mother’s dream of a turning their Greek island into a perfect Aegean guest house. Meanwhile, the film flashes back in time to the ’70s, when Donna (Lily James) was a wild young thing cavorting all over the continent, shagging everybody in sight.

Thus explaining (or trying to) how three different men could have potentially been the father of the single Mom Meryl’s child. As played by a trio of young hunks, notably “War Horse”s Jeremy Irvine (who grows up to be Pierce Brosnan). They make the case quite clearly how and why the young Donna/Meryl couldn’t keep her hands off all of them, one after the other, in rapid succession.

I would say Josh Dylan, who is making his big screen debut here as the young yachtsman that one day would become Stellan Skarsgard, has the best chiseled bod. British actor Hugh Skinner, who plays the young Colin Firth, doesn’t really get enough foreshadowing that his character is in later life going to be gay. An interesting opportunity missed.

Though Firth does camp up a storm in his own reserved way as his grown up self, and Christine Baranski (and Julie Waters) are back supplying even more camp (as if this film needed it).Which goes to prove something I’ve always felt. There can never be too much of a muchness. Or too much camp. Camp makes you happy. And so will “Mamma Mia 2.” 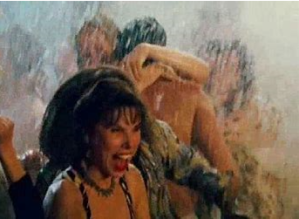 And last but not least, the young British hunk of hunks Dominic Cooper is back again as Sky, Sophie (Seyfried)’s hotter than hot love interest, and absentee husband. Dominic was one of the many stars of my year’s Best Film of that year “My Week with Marilyn” playing Milton Green, Marilyn Monroe’s ex-lover and now exasperated agent. He was also one of the original “History Boys” on Broadway and in film, and has been on “The Stephen Holt Show” more times than just about any one else (in this movie).

And he used to date Cher! He just told Stephen Colbert. So it must be true!

“Rocky: The Musical” A Knock-Out! 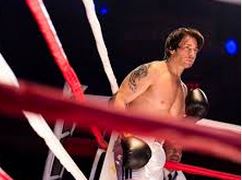 I ended up really liking the musicalized version of “Rocky” even though for three-fourths of it I was scratching my head, thinking “Why are these people singing?”

But then its’ climatic boxing finale is a startling smasheroo if ever there was one, which really knocked my socks off and just about everything else off, too. “Rocky” will rock your world.

In a very pallid, uneven act and a half, I really wondered how in the world “Rocky: The Musical” could have displaced “Mamma Mia” out of the gigantic Winter Garden theater, one of Broadway’s biggest musical houses that has been held captive, by captivating its’ boomer audience for lo these many moons.

“Mamma Mia” fans, don’t worry. It’s been re-located to the smaller Broadhurst Theater on W.44th St. But “Rocky: The Musical” is gonna to settle in for another substantial VERY long run at the Winter Garden, and is going to make oodles of money and please sportsfans and boxing devotees for years.

Whether it pleases the critics or wins any awards is besides the point with “Rocky” which garnered a surprise Best Picture Oscar back in the day. This time it’s not going to need those awards, like the Tonys,etc. to keep running.

I liked the 1970’s grainy John Alvidson-directed indie movie that made Sylvester Stallone a star. And put the phrase “Yo Adrian” into the pop culture vernacular. Philadelphia’s mean streets then became a legitimate cinematic background, competing with the New York of Sidney Lumet & Martin Scorsese, etc. as a gritty urban backdrop.

And Stallone’s final victory lap up and down the massive staircase of the Philadelphia Art Museum was against all reason, truly inspiring.

“Rocky:The Musical” tries to stay as faithful to the film as it possibly can. But it has as its’ director the current wunderkind Alex Timbers, who has always surprised with his cutting edge innovative stagings of “Bloody Bloody Andrew Jackson”, “Peter and the Starcatcher” and many, many more theatrical delights of recent years. And he was disappointing me mightily this time, until the last twenty minutes and then he, as they say, brought the ship home.

I’ve never been to a boxing match and hope never to go to one in what’s left of my lifetime. I am NOT a sports fan. But “Rocky” (and I should’ve expected this) brought the Boxing Rink to me and deposited it (almost) right into my lap. And it was sensationally staged, catching every single moment of that sports’ gory excitement and thrill, whether I wanted it to see it THAT up-close and personal or not.

One can’t help but admire the sheer vocal and physical stamina of star Andy Karl as Rocky Balboa himself. The Italian Stallion lives! In Karl’s adept, buffed to the max performance that requires him to sing his heart out for two acts, down a glass of three raw eggs, and then pull off one of the most astounding coup de theatre’s I’ve ever seen in that climatic boxing number, which you’ll never forget. And sends you out of the theater humming. Well, if not the music, the boxing.But Kudos to Karl, for performing what seems on-paper, impossible! Maxima Kudos!

Of course, such a rough. tough, no-holes barred, physical fight that pits Rocky against the world champeen Apollo Creed (Terence Archee) has to be staged and choreographed within an inch of its’ life. And Kudos to fight director/choreographer Steven Hoggett. Now HE’ll win the Tony for his frighteningly life-like recreation of that most violent of sports.

I’ve never seen anything like it on a stage. On screen, yes. There have been great boxing movies like “Raging Bull”, “Requiem for a Heavyweight”, and “Rocky” itself and its’ many, many sequels. The list goes on and on. But never onstage.

And this is what director Alex Timbers has done to beat the band. You might forget the rest of “Rocky:The Musical”. I’ve already forgotten the music by the usually dependable Broadway veterans Lynn Ahrens and Stephen Flaherty. Only one tune “My Nose Ain’t Broken Yet” stands out.

That comes at the beginning of the show and is reprised endlessly. Ingenue Margo Siebert makes a minimally impressive Broadway debut as Adrian, the plain pet-shop worker who is Rocky’s bizarre love interest. (She sold him his pet turtles, which he loves. Go figure.)

Played memorably by Talia Shire in all the movies and its’ sequels, in the greatest performance of her career, she grounded the borderline obnoxious character of Rocky, an aging, hard-luck amateur boxer and small-time thug.

Adrian is a famous character, as is the Italian Stallion himself, and Andy Karl, a theatrical vet, and she are a credible couple. Though their chemistry is passable. Nothing like the fireworks Shire and Stallone illicted onscreen.

Karl is NOT 29, as his character states, but he makes time stand still when he takes off his shirt and starts to box. TO THE DEATH.

Dakin Matthews has some nice moments and a nice song, too,”In The Ring”, as Rocky’s aged manager Mickey.

I can guarantee you’re gonna LOVE “Rocky:The Musical” but you won’t remember the hour and a half that precedes that unforgettable ending. But it’s not how you start, it’s how you finish. And “Rocky” finishes BIG!