Broadway is just bursting with musicals as the season is quickly drawing to a close and the Drama Desk nominations have been announced (See post before this one.) And a marvelous surprise was awaiting me when I saw “Bandstand” last night. It’s one of the best! And in the year of “Natasha, Pierre…and the Great Comet”,”Come From Away” and “Hello Dolly” that is really saying something. I had heard nothing about it. Didn’t know what I was in for. But trust me. It’s a Wow! I know I just said that about “Hello Dolly,” but this is a NEW musical. Brand new, with an entirely new score set at the end of World War II, as the boys come home to…Cleveland.

I know that doesn’t sound like a great premise for a musical, but believe me, it was tremendous. Tremendously rewarding in its’ own sweet way. And it heralds the arrival of a sparkling new bunch of musical talent. Composer Richard Oberacker, who co-wrote the lyrics with Rod Taylor, has written a marvelously melodic, but also dramatic score with one terrific tune after the other.Written in what I guess you could call Swing time.

The band is made up of overseas warriors coming home to find no jobs in Cleveland.(Think “Best Years of Our Lives”) and no work.

Laura Osnes is the only previously known quantity as the leading lady. Formerly “Cinderella” herself, and of course, “Hamilton”s great Tony-winning choreographer, Andy Blackenbuehler, who here makes his stunning directorial debut and well as keeping the dancing GIs and snappy home girls as peppy as a gin fizz.

But the real find is their incredible young leading man, the charismatic Corey Cott, who opens the show and brings down the house in a wife-beater! Wailing a solo tune that bears his name “Donny Novitski.” The hairy-chested but wiry and very, very angry Cott howls up a storm about his plight and the war (and his Polish last name).

Corey Cott turns out to be the man of the hour from “Gigi”! He was the Louis Jourdan role in the delightful musical  of the classic movie, which played all too briefly last season on Bway.

Cott’s got it all, and is allowed to show his great musical as well as emotional range here, as he returns from the war, truly scarred and troubled, whose only solace is playing his music.He convincingly morphs into ambitious band-leader D0nny Nova, who falls madly in love, natch, with the adorable Ms. Osnes. She is a local girl and a Gold Star war widow, and Danny was her late husband’s best friend. Julia, who has the unfortunate last name of Trojan. So she is Julia Trojan for most of “Bandstand”, and Osnes does her best work ever in this challenging, dramatic role, where she has to go from shy Sunday school church singer to swinging big band belter. And she does. And she’s been awarded a Drama Desk nomination for Best Actress in a Musical. This is in a year when her co-nominees are none other than Bette Midler, Patti LuPone,and Christine Ebersole. She and Cott sing their hearts out. And win ours in the process.

But I’m up in arms about the criminal overlooking of Corey Cott come awards time, which is upon us. Donny Novitsky a.k.a. Donny Nova is as equally challenging and demanding a role as Osnes’ Gloria Trojan. He should’ve been recognized. His vocal range is amazing and his sense of humor right on target. He sees Frank Sinatra as his competitor.  “He’s over-rated and he sings flat.” 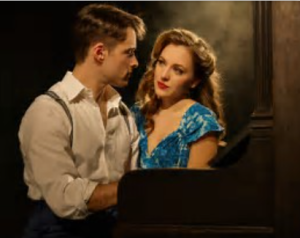 I also have to say, I found “Bandstand”s book, funny and sharp, and amazingly well-written. And again it’s Oberacker and Taylor, who wrote it along with all the orginal music in the show. “Bandstand” is certainly a winner on all fronts. I couldn’t have enjoyed it more. And the fact that the main music is being played onstage by “Bandstand”s centraI characters, gives the 1940’s inflected  music extra-snappy pizzazz, and oomph is another charming, jazzy plus. I hope audiences find it and embrace it the way Danny and Laura so romantically embrace each other in this tuneful war-time( and post-war) romance.

It’s at the Bernard B. Jacobs Theater on W.45th Street, right in the heart of Bway. And I hope Bway audiences take it to their hearts, too.

Well, the Drama Desk Awards are FINALLY over! Just finished at Town Hall at an unbelievable four hours in length! That’s without commercials!

That’s just how long it takes and its’ unfortunate that by the end of the fourth hour everybody and his mother are all getting very, very tired of the onstage band playing “Ask Me How Do I Feel?” over and over and over again until you could scream.

But since this is not a televised event(although this year you could watch live online at theatermania.com) nobody’s going to put the brakes on it.

The last presenters, the always too= loud Beth Leavel and a sleepy looking Brian Stokes Mitchell, looked like they had just rolled out of bed to announce —wait for it—the last THREE winners! This was at like 10:45 pm or so EST. And it started at EIGHT! It’s as long as the Oscars!

Two of the last awards of the lonnnng night, Best Lyrics and Best Musical went to “Matilda”! Yea! And Bertie Carvel also won for his frighteningly brilliant hammer-thrower from hell, Miss Agatha Trunchbull, in the Outstanding Featured Actor category. For the Tonys next month he’s in lead and he’ll win there, too, I’m predicting it right now!  Bertie FTW!

“Matilda” also won for Best Book. Playwright Terence McNally was a bit flummoxed when nobody accepted the award and was about to move on to the next one, when British director Matthew Warchus bounded up onstage to accept it for the absent Dennis Kelly, who is, of course, back home in Blighty. Ditto Best Set went to “Matilda” and that made by my count, five, and made “Matilda” the biggest winner of the evening. Warchus also accepted Best Lyrics for the absent Tim Minchin.

Warchus quipped “I have to keep accepting awards for every category and
not my own!” He surprisingly lost Best Director of a Muscial to Diane Paulus for the explosive combination of circus and music and dance that is “Pippin.”

So I’m happy for the “Matilda” crew. As you all know, dear readers, dear lovers of theater that I know you all are, that was my best of the best-ties this year.

I was also happy for the wonderful Jayne Houdyshell, who got a career achievement award, and gave a very touching, elegant acceptance speech. It seemed like she got a standing ovation. Well, it was a very LOUD,long ovation.

Cicely Tyson who won Outstanding Actress in a Play, won for “The Trip to Bountiful” DID get a standing ovation. And she had to be helped on to the stage and then bowed low and graciously to the audience. Something I’d never seen before. And she certainly deserved it.

She thanked the late playwright Horton Foote, who is finally having the success on Broadway that eluded him all his life.

“Pippin” came in second with four awards for Best Revival of a Musical, Best Director and Choreography, and the astounding Andrea Martin deservedly won Outstanding Featured Actress in a Musical.

“Vanya and Sonia and Masha and Spike” won Best Play for a white-haired Christopher Durang, who claimed “This was my OLD play.” and that the stairs leading up to the stage “were the most stairs I’ve climbed in ages.”

I am going to cut to the case and just say that in the coming days, you will be seeing on this blog the nominees who went on to win tonight.

I can’t wait to bring you Michael Urie, who best solo performance over Bette Middler! No! I’m not kidding! And I loved Bette in “I’ll Eat You Last” but she’s going home with only a Drama Desk Nomination. She was famously snubbed by the Tonys.I have always ADORED Bette and I feel awful for her. She’s BRILLLLLIANT in “Eat You”

Also coming to you right here is Jayne Houdyshell, and also Laura Osnes who won Best Actress in a Musical for “Rodgers and Hammerstein’s Cinderella”(Yes, that’s the official title) and also Tim Michin who as I said won big tonight for “Matilda” and who was present and accounted for at the Drama Desk Nominee Reception, which is beginning to appear on my You Tube Channel as you’re reading this. You’ll also see winners Judith Light for “Outstanding Featured Actress in a Play”, “The Assembled Parties” and Richard Kind for “Outstanding Featured Actor in a Play,” “The Big Knife.”

My show is at http://www.youtube.com/StephenHoltShow