Wondrous, Joyful, Surprising “On the Town” on Bway 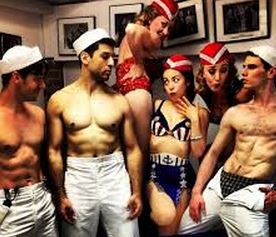 Imagine my surprise! To be thoroughly delighted, enraptured even, by a musical I always had a “meh” attitude towards previously. I had seen “On the Town” over and over in its’ many iterations and on film, too, and it had never turned my buttons. But THIS revival of “On the Town” pressed all of them, surprisingly and with joyous delight. Quelle Surprise! And why is this “On the Town” different from all the others?

The main answer I have to deduce is to give all the credit to its’ talented Tony  nominated director John Rando. He, of “Urinetown”, has really gone over the moon and captured it with his buoyant, light-as-air, but just-right re-interpretation. Rando and choreographer Joshua Bergasse have put the sauce (as in saucy) and the sex(see above picture^) back into “On the Town” making it as fresh and redolent as a Spring daisy.

I do think that that is what has been missing from all the other “On the Towns” I’ve ever had to sit through and go “What’s the fuss?” Well, the fuss started in 1944, right smack dab in the middle of WWII, when its’ three one-day-only shore-leave sailors burst off their battleship in the Brooklyn Navy Yard and onto the streets and subways of New York singing “New York, New York! It’s a helluva town! The Bronx is Up and the Battery’s down! The people ride in a hole in the ground!”

And in 1944, there also burst on to the Broadway scene, one of the most talented quartets the Great White Way was ever going to see, composer Leonard Bernstein, choreographer Jerome Robbins, and lyricist/librettists Betty Comden and Adolph Green. And what an explosion of talent that must’ve seemed to war-weary New Yorkers, who were seeing their city celebrated in the most joyful way imaginable.

And Comden and Green were IN it, too! As the loopy anthropologist  Claire de Loone(oy) and her mug of a tar.Ozzie, here essayed marvelously by Drama Desk Nominee Elizabeth Stanley and Clyde Alves. Stanley gets to show her considerable comic vocal chops in Act I’s “Carried Away” and her dramatic vocal ease in Act II’s “Some Other Time.” This is the part Betty Comden played originally. While her counterpart cohort, goofball Ozzie, was originally Adolph Green himself.

What a show that must’ve been! In 1944. But this “On the Town” seems to be just a good if not better. And did I mention they have an UNCOVERED 28 piece orchestra? One of the biggest I’ve ever heard on Broadway and they played Berntein’s classical score magnificently, dreamily. I never wanted them to stop!

Hunky Tony Yazbeck, nominated for the Tony Award for Best Actor in a Musical, works himself (and the audience) into a sweat with “New York, New York”,”Gabey’s Coming”, “I’m So Lucky To Be Me” as well as dancing all the  pas de deux ballet breaks (and there are many), then breaking your heart with “Lonely Town.” A star is truly born here. Gene Kelly played the part in the movie and Yazbeck obliterates his memory

His(Gaby)’s story drives the plot as he searches for his subway poster dream girl “Miss Turnstiles.” He finds his mythical  Ivy Smith, here embodied by real life Ballerina turned Broadway star Megan Fairchild  in a singing class led by the redoubtable (and hilarious).Jackie Hoffman, who is a comic drunk for the ages.

Completing the trio of star tars is the thumpingly innocent farm boy Chip, (Jay Armstrong Johnson) who with his 10-year-old, out-of-date New York visitors guide falls into the clutches of lady cab driver from Mars Hildy Esterhazy. And the hefty Hildy (Alysha Umphress) literally kid-naps (or in this case cab-naps) the virginal Chip into one of the most hysterical New York taxi-rides ever seen, aided and abetted by Beowulf Boritt’s masterful back-projections. Chip doesn’t stand a chance.as Hildy exults “Come Up to My Place” adding “I Can Cook Too” to great comic effect.

So, as a Native New Yorker myself, I was blown away and elated by this rainbow-of-a-valentine to My Fair City. SEE IT! New York, New York Is a Helluva Town!

“Matilda”! What a beautiful name! I thought, exiting the blindingly brilliant British blockbuster of the same name that just hit the heights on Broadway. A generation of little girls will now be named after its’ stalwart, brainy, pint-sized heroine.

At a purported five years old, Matilda is speaking, but not talking down, to the conflicted little girl in all of us, and rafts of little ones are in for the treat of their lives, and their parents, too, when they see “Matilda: The Musical” And they will see it in hoardes. “Matilda” is something they will never forget.

It’s so thoroughly original. I felt like I had never seen anything like it in the theater and on Broadway, yet.Is Bway known for originality these days? No.

But this empowering, powerhouse of positivity just sends you out of the theater practically jumping for joy!

I just realized that the closest thing I can compare it to is the brilliant film “Beasts of the Southern Wild”, last year’s indie film hit of hits that ended up with five Oscar nominations. “Matilda” is like “Beasts” in that they both so completely project a little girl’s eye view of the world.And it’s not always a pretty-in-pink world that they see. Scary, weird, frightening, horrifying is the world Matilda is confronted with.

Five year old Matilda Wormword is even younger than Qu’venzhane Wallis’ six year old Hushpuppy. A survivor of Hurricane Katrina. Matilda is a survivor of HER AWFUL PARENTS. And the cold, cruel adult world that is constantly threatening to destroy her. And take away her sole refuge, her books, and her love of reading…

Another writer that this Roald Dahl based, super-smart musical( book by Dennis Kelly, Music & Lyrics by Tim Minchin) reminded me of was Charles Dickens. But not “Oliver” the musical version of Oliver Twist, which seems treacly sweet compared to the dark creepiness of “Matilda.” Dickens found his greatest inspiration in the lives and point of view of orphans. David Copperfield’s opening sentence and proclamation “I am born”, is echoed in “Matilda”s first number “Miracle”. Which is about child-birth and most parents’ ecstatic reaction to their off-springs’ arrivals in this not-inviting world.

Matilda’s parents’ HATE her. Actively, passionately HATE her, and refuse to acknowledge their incredibly smart daughter’s amazing mind. Or even her gender. Her stupid, oafish father keeps calling her “son” but Matilda keeps insisting “I’m a girl!” This horrible trope keeps get repeated all night long, wearing poor Matilda down to a nub.

Her peroxided harridan of a Cockney-Mother-From-Hell, over-played to the hilt by Lesli Margherita, is shocking in her screechy “Looks! Not Books!” mantras of superficiality. Her solo is, of course, “Loud!” She is matched by the slightly more sympathetic(but really pathetic) sleazy, used-car salesman husband, Gabriel Ebert. The duo torment poor little Matilda to the point of child abuse. She torments her father back by dying his hair green and gluing his hat to his head.

Matilda’s only refuge from them is local public library and an earthy, interested librarian, the marvelously daffy but dignified Mrs. Phleps. Karen Aldredge should’ve had a big number herself. She would’ve brought down the house.

Instead, we get a bit too much of a focus on the super-sweet Miss Honey, who is one of the more, shakily drawn characters, in that she has toooo many musical numbers. Lauren Ward’s interpretation of the helpful, but timid school-teacher, who sees Matilda’s brilliance and wants it to develop, was so cloying, irritatingly sweet, I felt my diabetes acting up. She pretty much wore out her welcome in the first act, but did redeem herself in the second, where it’s touchingly revealed how poor she is in the number “My House.” She lives in a shack.

The dull, clanking sound you hear just when you think “Matilda” is just hopelessly child-centric is the entrance of the scary, villainess to end all villanesses, Miss Trunchbull. And that resounding clanking is also the sound of the endless awards that British comic Bertie Carvel,( yes, he’s a man, playing Miss Truchbull in bad, frightening, brown drag) hitting the stage at Mr. Carvel’s feet, as all the awards-giving bodies rise as one and just HURL Tonys, Drama Desks, and every other award in the theater world at him.

And he deserves them. With his hair in a tight-brown bun, a huge brown mole on his upper lip, his grotesquely large breasts, and his brown/grey skirt hiked quite high on his hairy legs (in sensible brown shoes), Mr. Carvel never lets you for a moment forget that he’s a man, playing a monster. And then humanizes the monstrous Ms. Trunchbull, too. Wow.

Carvel is not a one-note horror, he’s a layered delight. And his brown brogues kick “Matilda” upstairs, literally, as his astounding re-interpretation of the age-old British pantomime staple, the drag queen Dame, becomes in Carvel’s hands something bold, original, hilarious and in the number “A World Without Children” suddenly surprisingly touching, too. The British Gold Medal champion women’s hammer-thrower yearns for his/her glory days and at one point early in the proceedings hurls a hapless pig-tailed girl into the air. A coup-de-theatre followed by many, many more.

Main among them, the burping Bruce Bogtrotter, of the bold Jack Broderick, who it seems wants to devour all the chocolate cake in the world, and who is then made my Miss Truchbull to do so in the hilarious/scary “Bruce.” Broderick then gets to belt out the climatic anthem “Revolting Children.”

And Matilda herself? Well, there are four little girls who alternate in this super-demanding role of roles for a child actress, but I saw Milly Shapiro. Who had the face and power of a young Charles Laughton(I’m not kidding). As she forcefully puts her hand on her hip to face a threatening, creepy, lying, hostile universe AND HER PARENTS, you KNOW that this tiny Matilda is truly a genius and a warrior who will take on the whole world. And win!

“Matilda” may be the biggest Tony Award winner since “The Producers” and is settling into the Schubert for a long, long run.