Could 2019 be beginning with the ambrosial prospect of the brilliant British actress Emily Blunt up for TWO Oscar Nominations? One for Leading Actress for “Mary Poppins Returns” and the other for the nerve-shattering pregnant wife Evelyn in her real life husband John Grasinski’s horror film “The Quiet Place”?

Well, it’s happened already from a no-less than august awards body the SAGs, which nominated her twice in both categories. It’s almost unheard of. And she could win both.

The roles couldn’t be more diverse and more than show Blunt’s huge range as an actor. This certainly seems to be her moment. Awards-ignored for years, despite her superlative work in over 30 films, and every kind of character imaginable, 2019 finally seems to be her time to shine.

“The Quiet Place,” for those who may have missed it, is the early-in-the year 90 minute horror film that drew raves from critics as well as a boffo turn at the box-office.

incredibly taut and electrifingly directed and co-written by her real life husband John Grasinky, it stuns by the use of all things, silence. Blunt even has a deaf daughter played marvelously by the real life deaf actress Millicent Simmonds.

All are in jeopardy in a remote farm-house from a more or less traditional horror film monster (again astonishingly played by Krasinsky Himself) and if all this seems to much for the normal Awards-voting film=goer, don’t forget, they LOVE silent films(which “The Quiet Place” more or less is) and this is Emily Blunt’s year, there’s no denying itl And “The Quiet Place”s overwhelming and unexpected audience acceptance. only ads to Blunt’s momentum with Poppins. Disney had mounted a jmajor campaign for “Mary Poppins Returns” in all categories and Paramount has now done the same with “The Quiet Place.” So she was TWO major studios pushing for her.

Blunt even has a sure-fire “Oscar clip” scene where she has to give birth SILENTLY in an old-fashioned stand-alone bathtub. They all have to keep silent at all costs or the monster will incinerate them. It’s an edge-of-your-seater and in the same year as Blunt’s courageously/outrageous musical turn as  Mary Poppins, rivaling predecessor Julie Andrews, who also won an Oscar for Poppins.

It’s an awards-magnet role and Emily Blunt is the newly minted Awards magnet herself. And she’s nominated for a Golden Globe award for Best Actress in a Musical/Comedy, too.

The Golden Globes are this coming Sunday. Don’t miss them! If Blunt wins there against high-brow fellow Brit Olivia Coleman for “The Favourite”, she could very well begin her march to the Oscars! You heard it here first!

“Twelfth Night” in the Park, Cast of Thousands an Amiable Mess

Productions of Shakespeare’s perennial gem of a comedy “Twelfth Night Or What You Will” boasts a cast of literally hundreds, who seem like thousands. Is it too much of a muchness? Almost.

Directors Oskar Eustis and Kwame Kwei-Armah have taken what is the Shakespeare-in-the-Park’s most enduring positive, the audience, and put all and sundry onstage in the guises of many, many community groups from the Tri-State. It’s overwhelming and it almost overwhelms the play, but not quite. It’s Shakespeare’s best, just about, and seems to weather every storm that is tossed its way. In this case, crowds upon crowds of extras, some of them toddlers, some of them house-wives, all dee-lighted to be onstage at the Delacorte instead of just watching, lining up for hours for tickets and clapping madly.

Who can resist a cast that also resolutely SIGNS the play, too? The most beautiful, transcendant moment for me was when an unnamed young, bearded, blonde man, got up and singly signed one of Shakespeare’s more poignant song poems. I wish he was given credit for that in the program.

Also, because it was virtually the only quiet, thoughtful moment in this amiable, crazy-house of a mess.

There was no intermission. It was only 90 mins. and Shaina Taub’s average music did not send me. It made me long for the first time I saw “Twelfth Night” which was in an historic, traditional production at Stratford-upon-Avon in 1969, when I was in college in the Cotswolds, and young Judi Dench played Viola.

“How will this fadge?” I remember her saying til this day, enunciating Viola’s gender confusion. She’s disguised-as-a-boy Cesario, who everyone is falling in love with.

Sir Donald Sindon was the wronged Malvolio, and his performance is awfully close to the present Park’s Malvolio, Andrew Kober, who is the only one of the vast ensemble to capture Shakespeare’s tone of comic absurdity just right.

who is so distraught over her beloved brother’s recent death, she is followed around by a New Orleans jazz band, playing a funeral march every time she enters, black handkerchief in hand, copiously weeping. The tiny little high-heeled shoes that costume designer Andrea Hood has provided her with, ankle straps and all, make her teeter-totter between hilarity, despair, love and high fashion.

And Nikki M. James, a past Tony winner for “Book of Mormon” is quite fine as the business-suited Viola/Cesario. She’s not Judi Dench, but she’s owns the character in her own charming, petite way. 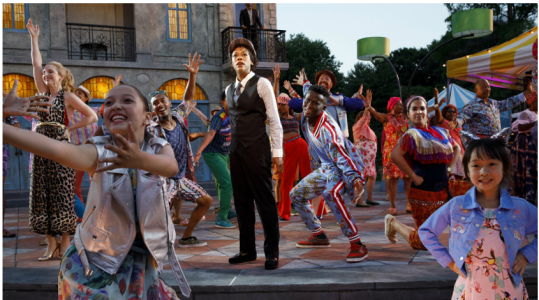 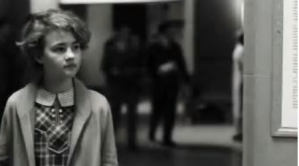 The great, essential New York Film Festival continues to top itself.I can’t stop talking about all the wonderful films I saw there this season.

It was an incredible year that it was having. now reveals their Centerpiece Film to be one of the best of the year, and the one film to emerge that may just end up  not only the most beloved but the most acclaimed. Haynes has had an amazing career to date with his legendary team of producer Christine Vachon and cinematographer Ed Lachman.

His films are never quite embraced as they should be by the mainstream. Haynes is Out and Gay and so is Vachon, but here in “Wondersruck” the brilliant Centerpiece film of this amazing festival, they have eschewed gay themes entirely and turned to a serious subject that you would never think their twinkling talents would ever touch – deafness.

There has never been a film that has addressed this terrible affliction head on, and with such grace and style and heart and heart-break. “The Miracle Worker” comes to mind as the only film to really face this disease. But Helen Keller was both blind as well as deaf and both Patty Duke as Keller and Anne Bancroft as her soul saving teacher both got Oscars. “Wonderstruck” should be showered with awards in every category that it is eligible for. Julianne Moore may be heading towards her second Oscar and her sixth(or is it seventh?) nomination for sure in a duel role that is head-spinning as well as heart-breaking. Her range is tested and she proves more than equal to the daunting task. She is Haynes’ muse, and is more than up to the double challenges these two roles face her with. She is for sure one of our greatest actress. Always amazing, in “Wonderstuck” she astounded me. 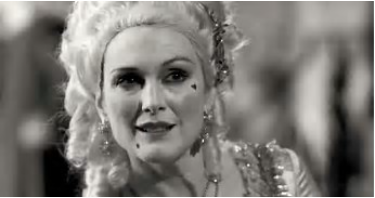 Also unforgettable is the wan, fey, first time performer, deaf actress Millicent Simmonds(pictured above). She plays the pivotal role of the non-hearing Rose, who wants to break out of her restrictive home in Hoboken, in the silent film black and white half of Haynes’ stunning cinematic coup du cinema. Just like Soirse Ronan’s “Lady Bird,” she wants to spread her wings and fly as Lady Bird does, to New York City. She is first seen as simply a lost little girl, wandering the streets of 1920s New York all by herself.

She keeps grasping articles and ads about a glamourous stage actress, Lillian Mayhew, who turns out to be her mother. So her seemingly pointless mission leads her to a theater and to Mom, here played by an almost unrecognizable Julianne Moore in the first of her two wildly divergent roles. To reveal her second would be to spoil the movie. So don’t let anyone tell you anything about it. 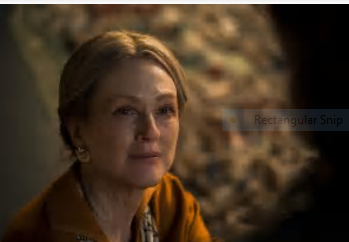 Her vain diva of a mother is a parent who wants nothing to do with her deaf child. She’s ashamed that her child is deaf.  “Wonderstruck” is the name of a book about museums that brings both halves of this bifurcated film together. The other half is set  50 years later in 1977 New York (and in color, with sound) and involves another runaway child, this time a boy, Oakes Fegley. His mother, the only parent he’s ever known (played beautifully in a cameo appearance by Michelle Williams) is killed at “Wonderstruck”s outset in a car crash.  Ben has nightmares about wolves. And flees his Gunflint, Minnesota home when  lightning strikes him deaf.

So we have two deaf 12 year-old children running from what they see as  unbearable situations, to New York City, to find a new home, one that will hopefully heal them, simultaneously, one in black and white and silent in the ’20s, to one contemporary and in color with sound. This seemingly impossible to connect or reconcile story, Haynes (and cinematographer Lachman) manage to pull off in a grand manner. Culminating with both twelve year olds finding their way to the Museum of Natural History. I will reveal no more.

The sound work by a huge team under the super vision of Drew Kunin is simply astounding. Silence and foley affects and sound mixing and sound editing have never played such an integral part in a feature film. But here the sound department just shines in creating a world where there is no sound whatsoever. The deaf lead a very hard life and “Wonderstuck” reveals its’ woes and complex challenges quite beautifully with a style and grace that is unparalleled.

The dizzying editing between past and present and black and white and silent and color and sound is by the wizardly of Affonso Gonclaves. The impeccable period and modern costumes are by the great Sandy Powell and the production design is by Mark Friedberg.
“Wonderstruck” is based on Brian Selznick’s book, from which he also wrote the moving screenplay.

I hope “Wonderstruck” isn’t too sentimental for our jaded times, but audiences and families can bring their children to this and enjoy it and be educated by it. The Museum of Natural History is really a character in this film and its’ great dioramas of wildlife are shown to full and wonderful effect. “Wonderstruck” is wonderful, that’s all there is to it.