When theater is this good, it’s a joy! And something as good as the current revival of “Little Foxes” on Bway at MTC with two of our absolute best actresses, Cynthia Nixon and Laura Linney alternating  roles is an evening to be treasured. And treasured again because you can see it a second time with the parts of the villainous Regina and the flibbertigibbet Birdie played by these two towering woman of the American Theater reversed. The critics were given a choice of who to see in which role first and I chose Nixon as Regina and Linney as Birdie. And I’ve never been happier! I can’t wait to see it again with the roles reversed! It’s a win-win situation. And to my knowledge this is an historic first. Actors have switched roles before, but not actresses. 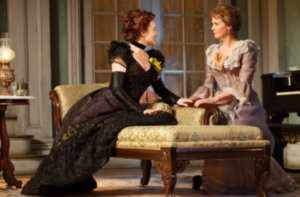 And how smart of Artistic Director Lynn Meadow to allow this to happen on Bway! This is something we never see! Men have been switching up historically, since as long as I can remember. “Becket” is one example. “Othello” is another.  But women? Never! All the more cause for rejoicing. And with one of America’s great stage directors Daniel Sullivan doing the work of HIS career, too! Why I just want to tear my program up and throw it into the air like confetti! Except I won’t because it’s too precious to me as a memory of a theatrical experience that was just about perfect! 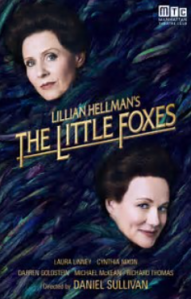 Of course, I saw Bette Davis do Regina in the movie, and she was pure evil. And she got ANOTHER Oscar nomination. I saw Elizabeth Taylor, of all people, doing the last revival of “Little Foxes” to be on Bway back, when I was in high school. So I felt I knew what I was going to see when I went in to the Samuel J. Friedman Theater on W.47th. But this “Little Foxes” was a total revelation. Never before have I see Regina played as more than a two-dimensional witch of a woman. Nixon added intelligence. I’d almost say compassion to Regina’s bitchy mix.

She seemed torn, for a second, just a tiny second, as her ailing husband (a very good Richard Thomas) climbed to his death on their staircase, like perhaps she considered going to help him. But of course, she does not. She resolutely stared into the audience as he chillingly dies, crying out for her help. Shivers. It gives me shivers just to write about this.

And never also has the character of Aunt Birdie been played as anything except pathetic and bonkers. When I saw Felicia Montealegre play it opposite Elizabeth Taylor, she was totally mad, and sad. And I thought “What hell it must’ve been for her to be married to Leonard Bernstein,” which in real life,   she was.

Laura Linney has none of that. Birdie is her Hamlet. She’s feigning madness to shield herself from the blows that life and her husband (a frightening oaf, Darren Goldstein) is dealing her. When the hulking Goldstein hits her across the face, you could hear the audience gasp as well as scream. Otherwise, the production was so taut and tense, you could hear a pin drop. This superb “Little Foxes” has preserved playwright Hellman’s original three-act structure, which is kind of refreshing.  Act One and Act Two ending with curtain lines that punch you right in the gut. It’s a well-made play. Remember them?

And it’s an astonishment to see that in Laura Linney’s hands, playwright Lillian Hellman has written not one but TWO famous scenes. Of course, there is the staircase scene where Regina lets her husband die. But there’s also a staggering scene at the beginning of Act Three, where Birdie fiercely charges to her niece Alexandra (Francesca Carpanini)”Don’t be like me!” because she has never had “a happy day, a whole happy day” in her life. Birdie is a symbol of the aristocratic south that is truly gone with the wind. And Regina is its’ frightening, mercenary 20th century future.

And both actresses play these juicy roles with such smartness that we are unavoidably reminded its the repressive, male dominance of their patriarchal society that have driven them to madness(though perhaps feigned here) and murder, for real.

Cynthia Nixon, Laura Linney, director Dan Sullivan are all here to remind us that there is greatness in living theater and that “Little Foxes” is a tremendously underestimated American play. Lillian Hellman would be turning cartwheels were she still with us. Brava, Divas!

I would also lastly like to note that come the Tonys (the nominations are to be announced shortly), Ms. Linney will be considered in the Leading Actress in a Play category for her Regina and Ms. Nixon in Supporting for her Birdie, because that’s how they appeared on Opening Night.