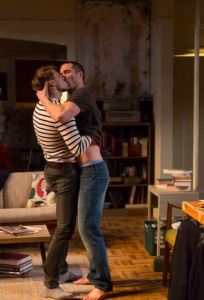 The Hartford Stage Theater Company is proving itself cutting edge in the extreme under the Artisitic Direction of Darko Tresnak, and  I say “Bravo!”to that. Their new play is a world premiere “Reverberation” by Matthew Lopez and it is about Queer Bashing. It also features beaucoup male nudity, gay love-making and other shocking (or delightful) homosexual language, ideas and interactions all within the first 15 minutes!

The septuagenarian matinée audience in Hartford that I saw it with didn’t seem phased by it at all. They were just there to see good theater, and “Reverberation” was all that and more.

Under the skillful direction of rising star Maxwell Williams, it was a thrill to see so much talent on display and to know that it was work that was well worth the trip up to snowbound Hartford, Connecticut to see.

The Hartford Stage is hitting its’ stride big-time with just this past year’s Tony-winning musical smash on Broadway “A Gentleman’s Guide to Love and Murder” and an equally stunning “Hamlet” in Hartford this past fall, starring twenty-something hot Shakespearean actor Zach Appleman.

Appleman’s Hamlet was more than matched by the nothing-less than superb performances in “Reverberation.” The cast of three  excelled and shone.

TV’s Luke Macfarlane (of “Brothers and Sisters”fame) absolutely tore the house down with his aching, primeval, broken, gay New Yorker, Jonathan, who has survived the hideous experience of seeing his lover Gabriel beaten to death in a queer bashing incident right before his anguished eyes. He was beaten, too, but survived to experience of living hell, the PTSD,if you will, of Gabriel’s horrific death in a one bed-room apartment in Astoria.

This is where we find him, making fast and furious love to a young stranger Wes, whom he has met online on Grindr. Wes is embodied, in and out of his clothes, by the handsome young new-comer Carl Lundstedt making one of the most powerful debuts I’ve ever seen. His comely Wes is not just a trick or a boy toy, he’s a thinking, feeling, intelligent young gay man who is just as lonely as Jonathan is. His Act II monologue alone would launch him into the Theater’s A-list stratosphere if this terrific production ever makes its’ way to the Big Apple, and it might.

Aya Cash as Claire, a hapless party girl who lives upstairs of Jonathan, completes the three-hand trio. A Bloomingdale’s girl in clompy high heels and a messed up love life that matches Jonathan’s all to closely. She reminded me of a Sally Bowles, and Cash delivers hitting every note of needy Claire’s up-and-down life.

Matthew Lopez, the extremely young and extremely talented and extremely promising playwright, has written a very important play with “Reverberation.” I hope it has an equally stong after-life as the play he’s most known for, “The Whipping Man.”

You see Lopez is dealing with several levels of reality and trauma here, and what you see is not necessarily what you THINK you’re seeing.

The shattering climax is absolutely devastating and “Reverberation” is a play that you will end up thinking about forever. So original is its’ construction and so flawless is its’ execution. The two tiered set by Andromache Chalfant and perfect  costuming by Tony-winner Linda Cho complete the lived-in feel of this seemingly naturalistic thriller. Or is it what it seems? No spoilers here.