Talk about timing! As the NBC promos all night were announcing before the show came on at 11:30 pm, that “red-hot Sam Rockwell” was hosting tonight’s show. Fresh off his surprise win at the Golden Globes on Sunday night, his garnering their Best Supporting Actor Award for “Three Billboards Outside Redding Missouri” was mentioned to maximum effect.

His best segment was his Opening Monologue which turned into a song and dance number ( yes, he can do both, and he’s a terrific dancer, too ) about how his award this week,( and by implication, his double win at the Critics Choice Award on Thursday night )  he sang how he’s  now gone from “A character actor to a leading man.” And this number hit just the right note of self-satire, and also  SNL’s clear championing of him in this happy moment of transition. He’ll no doubt be back there to host many, many more shows. And hooray for that!

I knew audiences knew he could play anything, act anything, and in “Three Billboards” he practically does.

But I’m sure he surprised many by singing and dancing and busting a move, as they say. Grabbing a top hat and cane and tapping off the tiny SNL stage into the audience, down the aisle and into the off-stage areas of NBC hallways, who have the room for all this action.

It concluded with him jumping on a camera crane and being hoisted aloft above the cheering, delighted crowd, as literally we all saw his star rising before us. It’s like SNL was determined to hand him an Oscar onstage. Which, by setting him up this way on the show as the host who was about to become a star, he BECAME a star literally right before our eyes. Bravo! Well done by all! 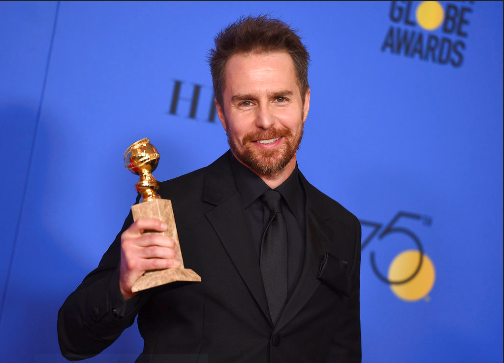 “Three Billboards” is also up for Best Ensemble and so he could actually win TWO SAG awards a week from Sunday night. It’s feeling like a coronation and I think it is.

“I, Tonya” Margot Robbie & Allison Janney Are Wonderful. The Film is a Crock